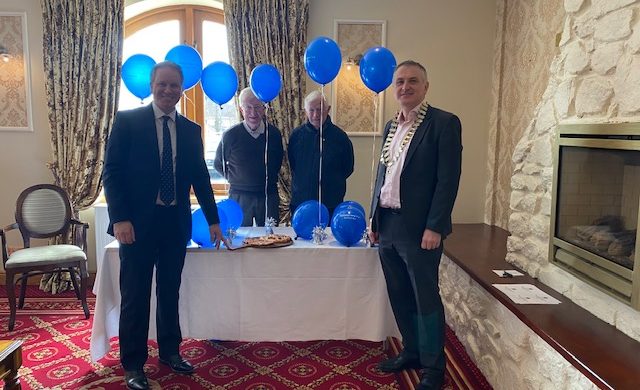 Fintan Loftus General Manager Clybaun Hotel and Lions Club member, Fergal McAndrew Club President pictured with in background Michael Murray & Jim Kent organisers of Dinny’s Do’.  The event which is named after a famous Galway character, was inspired by ‘Eric’s Party’ which has been run by Dublin Lions for many years.  In its first year COVID restrictions meant that there could be no centralised party, so pizzas, soft drinks and other goodies were delivered to various homeless hostels throughout the city.  When they were consulted this year the hostel guests expressed a strong preference for a similar arrangement. On Friday 11th March Galway Lions made deliveries to six hostels across the city with a total of 132 adults and 41 children receiving pizzas, wedges, cocktail sausages, soft drinks and chocolates. Their gift packs also included cinema tickets, vouchers for Supermacs and drawing materials for the children. The Lions also delivered a number of radios to one of the hostels and a TV to another. The feedback from the hostel guests has been extremely positive.  Quite a few mentioned how nice it is to know that people in Galway think about them and care.  For the children the occasion provided what must have been a very welcome respite – however brief – from a difficult   situation   of   homelessness. ‘Dinny’s Do’ will certainly remain a fixture on the club’s calendar for some time to come.